Golf is a sport that many people yearn for and fascinate. On the golf course, everyone, every movement, every grass, and every air molecule are very pleasing to the eye. Every action is required to be perfect on this sports field, including driving a golf cart.

Golf carts, also known as tour buses, patrol cars, and electric off-road vehicles, are environmentally friendly passenger vehicles designed and developed for golf courses. With the battery as the traction force, this type of car has a long design life and sufficient power to climb hills.

Golf carts have different functions in different scenes. Golf carts can also be used in resorts, villa areas, garden-style hotels, tourist attractions, etc.From golf courses, villas, hotels, schools to private users, they will all be short-distance transportation. Because they have different functions in different scenarios, their configurations will be different. As more and more people take advantage of its versatile performance, the golf cart market is developing. The batteries used in golf carts are generally divided into three types, namely maintenance-free lead-acid batteries, water-added lead-acid batteries that need to be maintained, and lithium batteries.These batteries have their own advantages.

Adding water to lead-acid batteries is relatively troublesome to maintain, and you need to pay attention to the amount of distilled water in the battery from time to time. If you do not add water in time, it will easily cause the battery to dry out and cause damage to the battery. Therefore, the battery condition needs to be checked regularly in daily use. In some scenic spots with slightly higher slopes, lead-acid batteries with water are more powerful, which is its advantage.

Lithium batteries are very simple. There are many advantages and one disadvantage. Compared with the other two types of batteries, the price has no advantage. 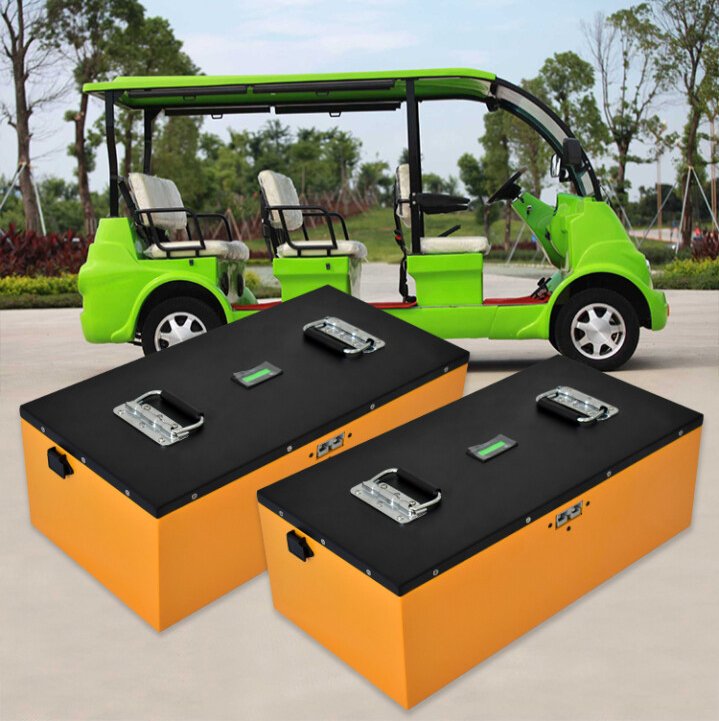 The difference in weight and performance allows the lithium-powered stroller to carry two adults of average height and their equipment before reaching its carrying capacity. Since the lithium battery maintains the same voltage output regardless of how the battery is charged, the trolley continues to run after its lead-acid battery lags behind the battery pack. In contrast, lead-acid and absorbent glass felt (AGM) batteries will lose voltage output and performance after using 70% to 75% of the rated battery capacity, which will have a negative impact on the carrying capacity and become more complicated over time.

Whether you use lead-acid batteries or lithium-ion batteries, any electric car or golf cart faces the same defect: it must be charged.

A good golf cart needs to maintain consistent strength and speed on any course terrain. Lithium-ion batteries can solve this problem without problems, but lead-acid batteries will reduce the speed of the trolley when the voltage drops. In addition, after the power is dissipated, it takes about eight hours for an ordinary lead-acid battery to be fully charged. The lithium-ion golf cart battery can be charged to 80% of its capacity in about an hour and fully charged in less than three hours.

In addition, partially charged lead-acid batteries will suffer from sulfate damage, which greatly shortens their service life. On the other hand, lithium-ion batteries will not produce adverse reactions after they are fully charged, so golf carts can be charged for pit stops at lunch.

In addition, partially charged lead-acid batteries will suffer from sulfate damage, which greatly shortens their service life. On the other hand, lithium-ion batteries will not produce adverse reactions after they are fully charged, so golf carts can be charged for pit stops at lunch.

(1) The patrol car battery should be charged in time after discharge to avoid charging for more than 24 hours, otherwise the battery life will be shortened.

(2) In summer, after the vehicle is driving, the battery temperature is high, so it is not advisable to charge it immediately. Wait for the battery to cool down before charging, and do not charge it in the sun.

(3) The temperature in winter is very low, and the charge and discharge performance of the battery will be reduced when it is in a low temperature state. Charging should be carried out as close to room temperature as possible.

(4) Use the special charger equipped with the vehicle to charge the battery, otherwise it will affect the battery life and life of the battery pack.

(5) During driving, drivers should pay attention to the power indication of the instrument, and charge it in time when the power is exhausted.

(8) When the life of the lead-acid battery reaches the end of its life, the capacity of the battery drops sharply and cannot meet the requirements of power supply. At this time, a new battery needs to be replaced. Batteries of the same brand, the same specification, the same capacity, and the same voltage (full voltage difference <0. 1V) should be used as a group. The new battery pack should be charged evenly before use.

(9) The surface, connecting wires and bolts of the battery should be kept clean and dry for a long time. Avoid the appearance of liquid on the surface of the battery, please erase it in time if necessary.

(10) The battery connection must be maintained well. Always check the poles of the battery for oxidation and loosening of the fastening bolts to avoid heating, ignition, and burning out of the poles due to poor contact.

How to protect Golf Cart Battery? Or How to PROLONG driving mileage?

1. Avoid the rapid acceleration of the electric golf cart to start

If you start with a rapid acceleration, the current in the high-voltage circuit will be very large. Frequent rapid acceleration will affect the life of the motor controller and power battery, while shortening the driving range.

3. Maintain the stable driving speed of the electric golf cart

When road and traffic conditions permit, the vehicle should maintain a stable driving speed. After the vehicle starts and accelerates to a certain speed, the accelerator pedal can be relaxed appropriately to maintain the current speed.

4. Maintain the normal tire pressure of the electric golf cart