All Things You Need to Know about Lithium Battery Terminals

How to Reduce Poor Connection Chances?

What’s the Difference between Terminals and Lugs? 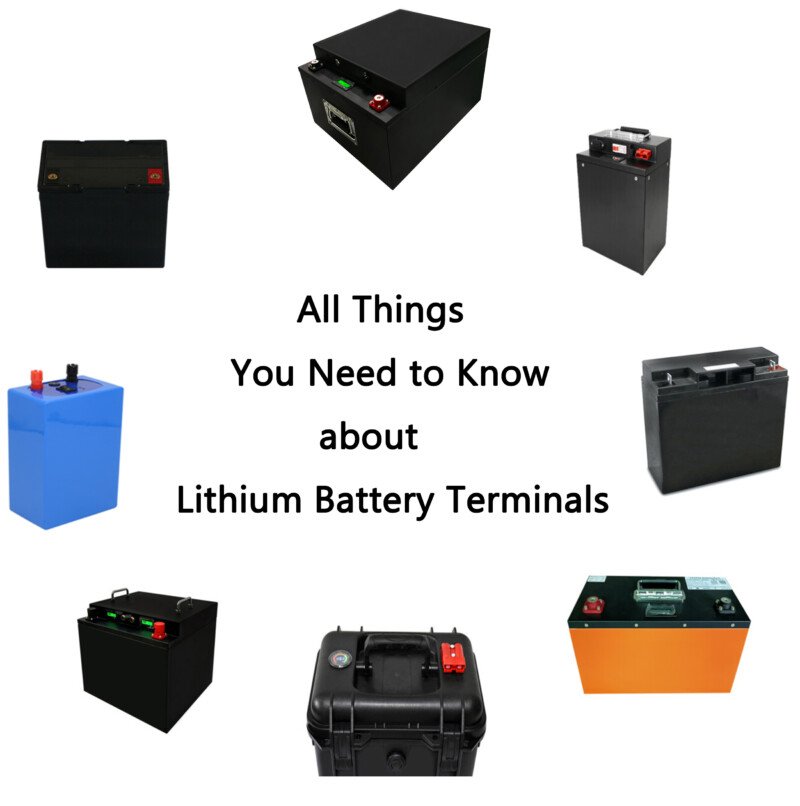 *Auto Mail Terminal (SAE Terminal): This is the most common type of battery terminals. According to its name, we can gain that it is ussually used in cars. When you are replacing your car battery, you can find that there are auto mail terminals. The diameter of negative post is alway smaller than it of positive one in order to avoid wrong terminal connection of reverse polarity. This is a way to avoid short circuit. Another terminal in car battery you can find is Pencil post terminal(common in Janpanese car batteries). Compared with pencil post terminal, the auto mail terminal is larger and more modest.

*Hairpin Terminal(Stud Terminal): The size of hairpin terminal is 3/8 inch. It is designed as a hardened steel threaded clamp for attaching and holding a terminal transfer terminal connection to the lead terminal base.

*Double post terminal/sea terminal(Dual Post Terminal / Marine Terminal): This type of terminal has an automotive post and stud. You can make the connection using either a traditional pressure contact or a ring terminal and wing nut connection.

*Terminal button:Terminal button is also known as embedded terminal or insert terminal.You will find these terminal from M5 to M8 which indicates the metric size of the diameter of the bolt thread. These terminal types are most commonly found in absorbent glass mat batteries used in emergency protection and UPS system. For example, if you have a battery with a M8 terminal, you will need a bolt with an 8 millimetre diameter thread.

*Terminal AT (double terminals type SAE / studs): They are commonly found in traction-type batteries used in heavy-duty cycling applications such as floor scrubbers and self-contained solar panels. This type of terminal has a carport and a hairpin.

Tips of Maintain Battery Terminals’ Connection
When battery-powered vehicle such as cars and e-bike and equipment meet the problem of intermittent performance issues, one of the most common reasons for this is poor connections between cables and terminals. Loose connections can be caused by both under-tightening and over-tightening of the battery terminal connectors, as well as corrosion that can occur over time.

*Keep Connection Clean between Terminals and Connectors: this tip can maintain the best connection state. If corrosion is observed on the battery terminals and connectors, they should be cleaned with a wire brush and a solution of baking soda and water to neutralize any electrolyte that may be on the surfaces. Using corrosion inhibitors after finishing proper connection is a effective way to reduce the corrosion formation on terminals. What you should to be noticed is that don’t apply grease or other lubericants between terminals and connectors because these materials will interfere electricity connection.

*Regularly Check the Cables : Check cables to determine if they are corroded. If cables are corroded, they need to be replaced immediately.Corrosion can often extend under the cable before the corrosion is visible. Studies have shown that wire cables with crimped connectors that are not soldered to the cable ends can corrode faster and create a high resistance connection between the wire cable and crimped connector. This high resistance can cause excessive heating during discharge and melt the lead terminal, causing a loss of connection and permanent damage to the battery. If any of the cables show signs of melted insulation, corrosion under the insulation, or have bare wire showing replace the cables and connectors.