Wound electrodes have the advantage of faster production compared to stacked electrodes. Since its market introduction in 1994, the 18650 format became a popular standard for Li-ion cells across the consumer industry. Increases in diameter by 3 mm and in height by 5 mm lead to the new 21700 format. Similarly for both cell formats is the wound jelly roll which has approximately the form of an Archimedean spiral.

Obviously, you can find out from the name that these two types of batteries are actually different in size. But they are suitable for the same devices in most cases.

Many people will be torn in the choice of these two batteries in the end which battery is better? Hopefully this article will help you solve this problem. 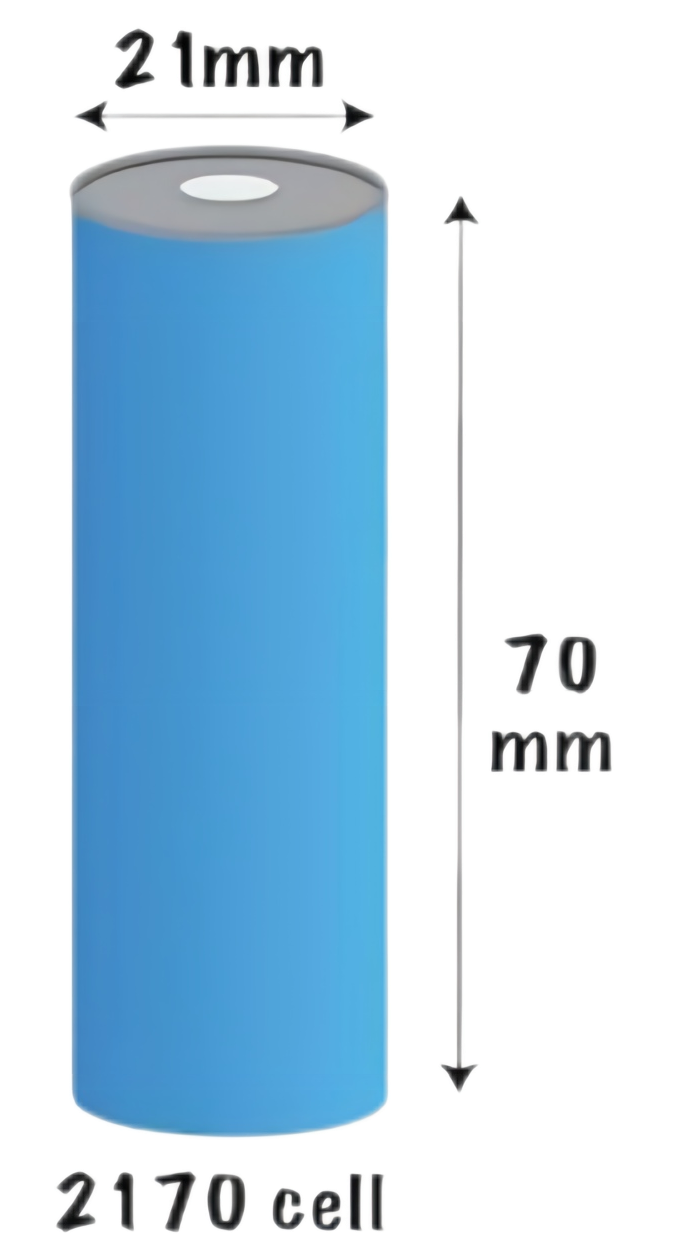 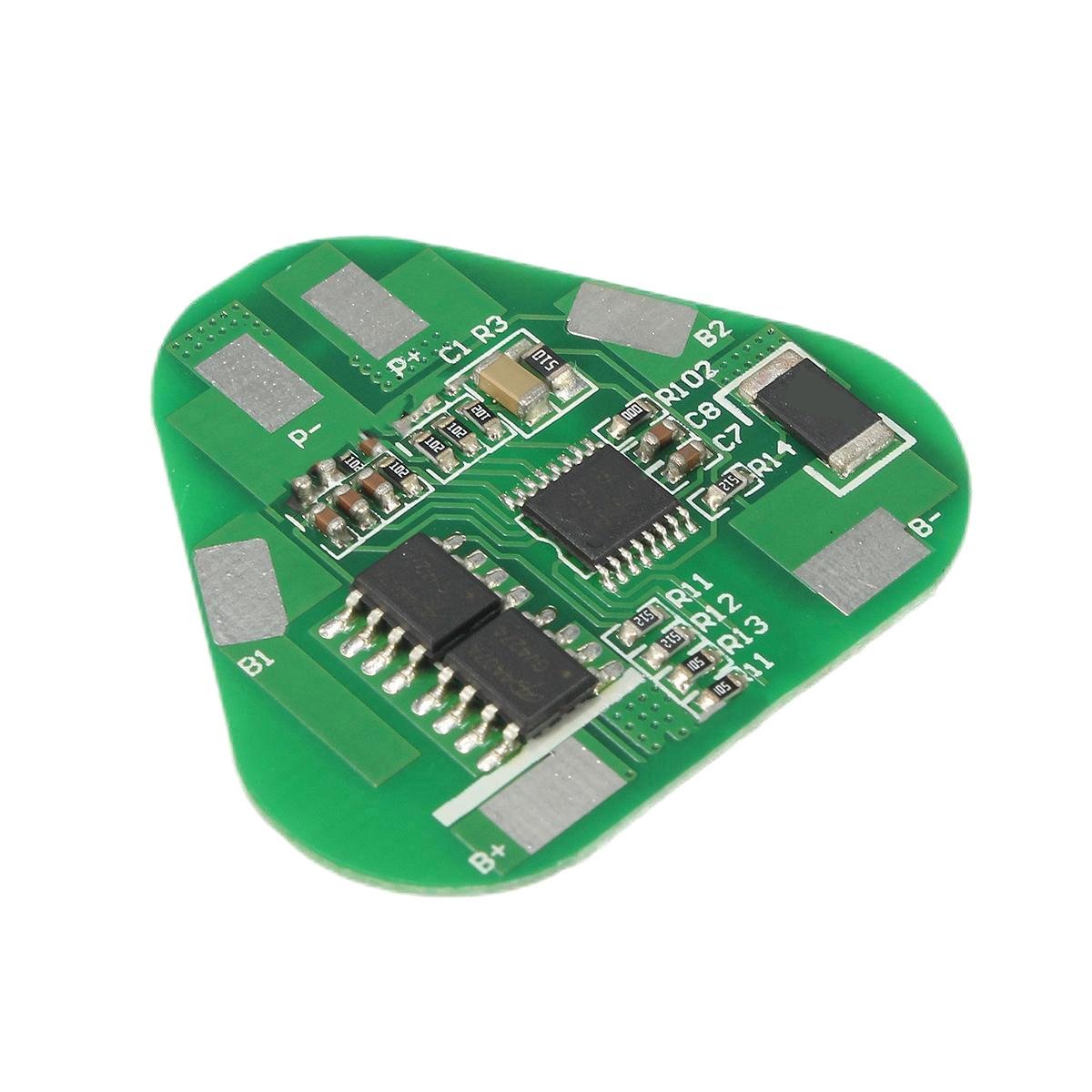 1.）The energy density of the 21700 type battery is higher than 18650 type battery.
2.）The cost will be reduced.
3.）The 21700 batteries are lighter in weight.
The capacity supported by 21700 battery are more than 4000mAh, even some 5000mAh have emerged. Therefore, the larger capacity could help to increasingly prolong the lives of modern devices and to upgrade user’s using experiences.

Like the proposed 4680 cells, the packs of 21700 cells designed for power tools use improved packaging to deliver increased performance. For example, a standard 18V battery using 18650 cells can produce up to 800 W of power output. The newer packs based on 21700 cells can produce up to 1,440 W, an 80% increase. As noted above, the 21700 inherently has about 50% greater capacity and energy density than the 18650 for discharge rates up to about 3.75C.Want More Details: Download our battery design ebook. Lithium Battery Design Design Ebook Download(2M, 20 pages, PDF)

18650 It has a disadvantage in terms of energy density and cost, but it performs better in terms of standardization, automation, technological maturity and ladder utilization.

Cylindrical batteries, especially 18650, due to their own structural characteristics and the standardization of their models, the level of automation in the production of cylindrical batteries is the highest among the three main battery forms. This makes it possible to have a high degree of consistency, and the yield is improved accordingly. Data show that the yield rate of major foreign manufacturers such as Samsung and Panasonic can reach 98%, while Chinese manufacturers can also exceed 90%.

1) As mentioned earlier, the monomer consistency is better；

2) The monomer itself has good mechanical properties. Compared with square and soft-packed batteries, a closed cylinder can obtain the highest bending strength at approximately the same size.；

3) The technology is mature and the cost is low, but at the same time, the space for cost optimization has been almost consumed.；

4) The energy of the monomer is small, and the form is easy to control in the event of an accident, but this is also becoming the reason for its replacement (what about the popular saying, those who make you will also destroy you, and those who can’t kill you will also make you strong. The same is true for things)

2) Under the conditions of uneven temperature and environment, the probability of alienation of the characteristics of a large number of batteries increases. Of course, the reason why Tesla chose 18650 at the beginning of the design is believed to be just a helpless choice, because 10 years ago, only cylindrical batteries could be produced in large quantities. Qualified power batteries. On the contrary, the safety and thermal management needs of the battery are the driving force for the development of its powerful electronic control system.

3) The room for energy density to rise is already very small. According to the news in 2016, Chaowei has achieved a monomer capacity of 4050mAh, and the specific energy of the battery is 306Wh/kg.

Many wonder what the most significant difference between a 21700 battery and a 18650 battery.

From a physical level, it is simple;

The extra 5 mm length and 3 mm diameter of the 21700 battery cell can increase its volume by 47%. This also means an increase of 7,700 cubic millimeters of space, which can be used to fill the anode, cathode and electrolyte materials that transmit energy. 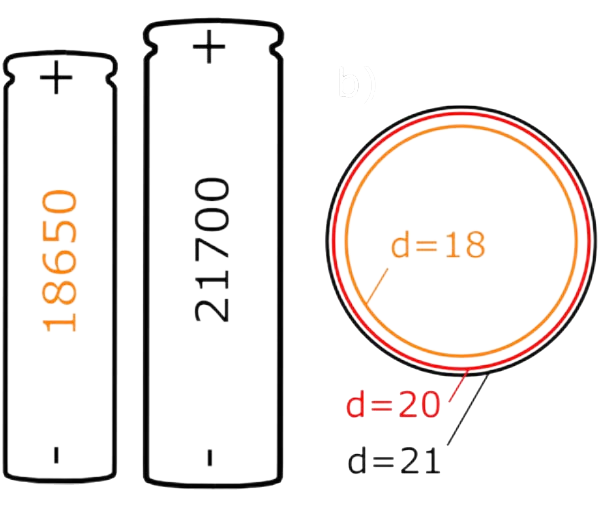 From a battery performance level:

For cylindrical cells these parameters correlate with each other. This contributes to the lower performance of high energy cells. Electrode thickness has a possitive influence on cell resistance. 21700 battery is thick than 18650 battery.

Going from the 18650 to the 21700 format, the cell resistance decreases noticeably and shows a relatively flatter correlation to anode coating thickness.

The reason is the larger usable coated cathode area in the larger 21700-type cells, especially due to the outer windings of the jelly roll.

Electrode thickness has a negative impact on the discharge rate capability. As we all known that 21700 battery is thick than 18650 battery.

Cells with thicker electrodes experience higher losses by limited transport, resulting in lower discharge energy and underutilized electrode active material. Thegeneral trend for all tested cell types was found that therate-capability is limited by the temperature on the cell surface due to current flow.

Change 18650 cell into 21700 cell, battery energy density can be increased by more than 20%. 21700 battery power density is better than 18650 batteries. According to the current disclosure of Tesla, under the existing conditions, the energy density of 21700 battery systems is approximately 20% higher than the 250WH to the original 18650-300 Wh battery system. At the same time, according to the Panasonic lithium battery power test in monomer batteries, the bulk density of its 21,700 battery is significantly higher than that of the 18650 cell monomer.

b. Since the 21700 lithium battery has more energy, the total number of parts and facilities required to manufacture the same Wh lithium battery is reduced, which is beneficial to reduce costs.

c. Since the 21700 lithium battery has more energy, the total number of parts and facilities required to manufacture the same Wh lithium battery is reduced, which is beneficial to reduce costs.

e. The number of lithium batteries with the same Wh number is reduced by 33%, so the requirements for the injection and sealing process are also somewhat reduced, and the cost is somewhat reduced.

f. Similarly, with the reduction of the overall number of lithium batteries, the requirements for chemical facilities have also been greatly reduced, increasing the rate and reducing costs.

1) When the energy density is appropriately increased, conventional materials can be selected, with stable performance and high cost performance.；
2) The design of the multi-pole headphone structure can be appropriately carried out to reduce the internal resistance；
3) At the same energy density, graphite with fast charging characteristics can be selected to improve fast charging performance.；
4) Appropriately increasing the diameter and height can obtain more effective volume.
5) The capacity of the single battery cell is increased, the proportion of auxiliary components is reduced, and the packaging cost is reduced.Want More Details: Download our battery design ebook. Lithium Battery Design Design Ebook Download(2M, 20 pages, PDF)